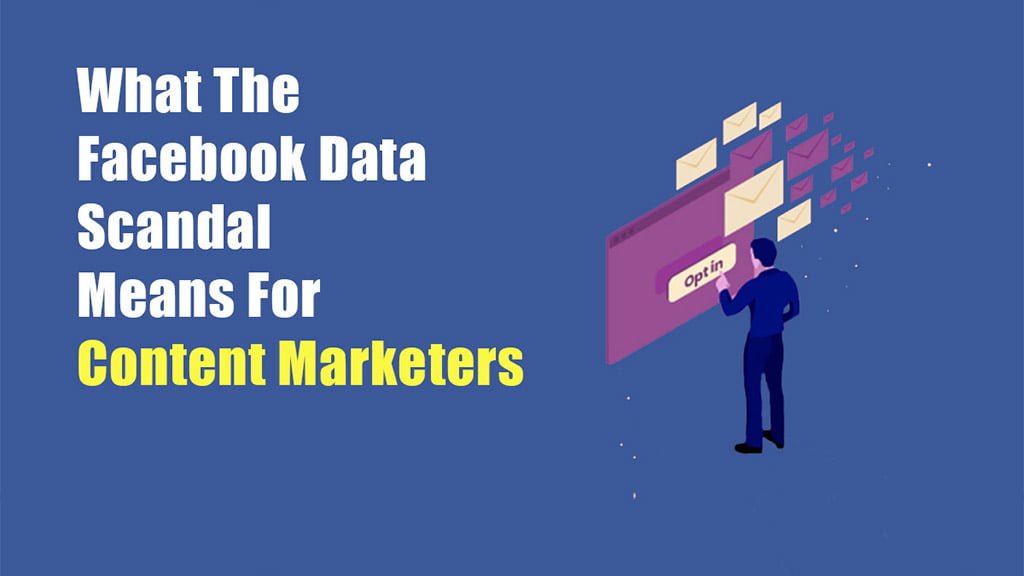 Facebook’s Infamous Data Scandal – How does it impact marketers?

Ok, unless you’ve been living like a hermit off the grid, then you probably would have come across news stories about the major scandal of the year – the one involving Cambridge Analytica and its unlikely partner, Facebook.

For those who are not aware of what exactly happened, here’s a quick recap of the,

The scandal revealed that Cambridge Analytica, a political consultancy firm misused the personal data of over 87 million users. And, the source of the data – Facebook!

Cambridge Analytica sold this personal data to several political organizations, which in turn, used it to shape public opinion during the US presidential election campaign of 2016 and the recent Brexit referendum. Cambridge Analytica was at the receiving end of a massive negative press and has filed for bankruptcy after the scandal erupted.

Does this mean that Facebook is in the clear? Well, no!

Here’s how the events unfolded. Way back in 2013, CA (Cambridge Analytica) created a Facebook quiz, named “This Is Your Digital Life.” The questionnaire mined data from over 30,000 participants.

In 2013, Facebook’s data settings allowed third-party apps to gather information from users. This resulted in CA getting access to millions of users’ data as well as the data of their friends in the network.

Wondering if CA breached your data?

Facebook later amended this setting in 2014. Today, Facebook has been receiving plenty of flak for its lethargic attitude to data privacy, and Mark Zuckerberg was grilled in the US Congress. In his testimony, the Facebook founder admitted that users’ data is used for displaying targeted ads.

Ok, so what is Facebook’s Reaction to the Scandal?

Simply put, the Cambridge Analytica scandal is a PR disaster for Facebook. The social networking giant has taken a defensive approach as media, government and even its own users have begun asking tough questions about the data used by the network.

This has forced Facebook to make several changes to its platform in an attempt to bring in transparency and greater control. Some of the highlights of these changes include:

Privacy Settings – Facebook recently announced that it had revamped its privacy settings, making it easier for users to control their settings. Users have now greater flexibility in deciding how they want their data to be used.

Terms of Service – To allow for better clarification of data collection policies, Facebook has rewritten their Terms of Services. On perusal of the new policies, it’s clear that Facebook shares data with other app platforms like Messenger, Instagram, and Whatsapp. It also indicates how much of your data is shared with advertisers.

Coming to the pressing question,

“What do all these changes mean for Facebook Marketing Agency?”

Given the huge negative press received by Facebook, it’s understandable that marketers are concerned about how all this will impact them.

The good news is that – brands need not implement any drastic changes to their advertising activities. The bad news is that – in the long run, you’ll have to make some changes.

Here are a few factors businesses and digital marketers have to consider:

Audience Reach – Despite media exaggerations and trending hashtags like #DeleteFacebook #QuitFB, Mark himself has stated that there hasn’t been a massive increase in the number of people deleting their accounts since the scandal broke. Other independent studies support this fact. In fact, a report from Marketing Week states that only less than 8% of users surveyed indicated that they had deleted their FB account based on the scandal.

User Behaviour – Though the numbers haven’t been discouraging, experts state that there has been a marked change in user behavior. Users are likely to be more cautious about their data and privacy settings going forward. Additionally, users are likely to restrain themselves when engaging with Facebook and experts predict that there is bound to be an increase in the use of tools like “ad-blocking” software.

Marketers will have to consider the changing attitudes of their target audience while designing upcoming campaigns. With that said, the overall effect of the scandal on Facebook and its ecosystem is expected to be nearly negligible. In fact, the advertising spends on Facebook is expected to increase by 16.9% in 2018, compared to last year.

It’s understandable that brands and their marketers are panicked about this scandal. But, the key issue here is about consent rather than the usage of data. Simply put, brands need not be worried if they have obtained the right permissions from their users. Ensure that your data tracking and activity don’t impact the rights of your users.

Here are a few things that you can do to ensure that:

We suggest emailing your entire email list regarding what data you have collected about them, and how you plan to use it. Additionally, let them know that they can enquire about your data tracking whenever they want.

Here are a few words to include in your request for consent:

Tell them why you’re emailing them in the first place,

The General Data Protection Regulation is in effect from May 25, 2018. This gives customers more control and visibility over how companies handle the personal data of subscribers.

Tell them why you use their personal information

Something like this, “We wish to keep you updated with the latest product information and offers and we use your vital statistics like age, gender, location to provide you with the most relevant information.”

“If you would like to know what information we hold about you, all you have to do is send us an email, and we’ll mail the details to you.”

“If you wish to remove all your personal information from our system, let us know, and we’ll remove it.”

If you would like to know more about the impact of the Cambridge Analytica scandal on your marketing strategies or would love to unlock the potential of Facebook marketing, get in touch with our Facebook Marketing Agency of skilled digital marketers and we’ll help you out!

Post Views: 328
Previous Post
7 Simple but Effective Ways to Get your Site Visitors to Convert
Next Post
Tips to Protect and Reinvent your Personal Brand during a Career Change